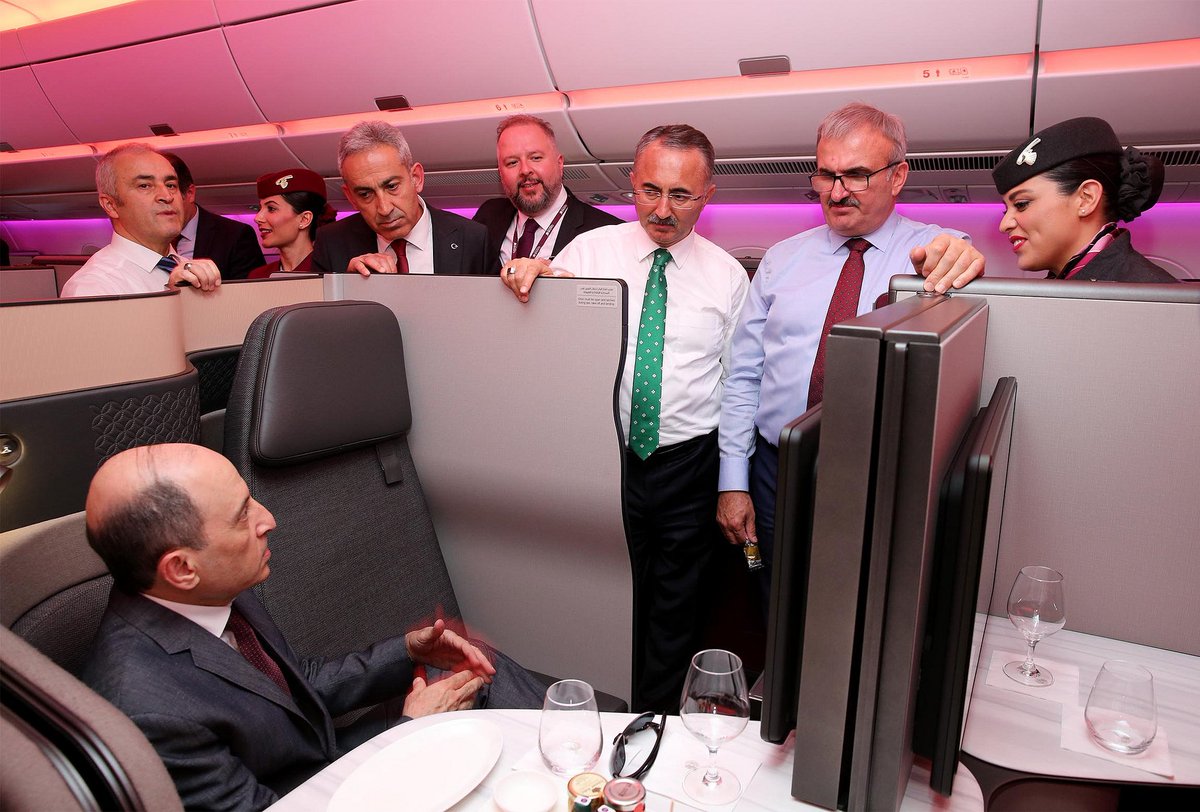 Qatar Airways was in the spotlight during the opening day at Eurasia Airshow, a new aviation industry event hosted for the first time in Antalya, Turkey. Visitors to the airshow were able to experience two of the airline’s aircraft, the Airbus A350-1000 and the premium Qatar Executive Gulfstream G650ER. VIP visitors to the Qatar Airways aircraft included Turkey’s Deputy Minister of Transport, Maritime and Communications, His Excellency Mr. Yuksel Coskunyurek; the Governor of Antalya, Mr. Munir Karaloglu; and the Deputy Director General Civil Aviation Turkey, Mr. Bahri Kesici.

The airline showcased its most advanced passenger aircraft featuring the revolutionary Qsuite Business Class seat, the Airbus A350-1000, as well as the Gulfstream G650ER, a premium Qatar Executive aircraft, and an industry-leading long range business jet.

Qatar Airways Group Chief Executive, His Excellency Mr. Akbar Al Baker, said: “We are delighted to have attended and participated in the newly-launched Eurasia Airshow in Antalya, Turkey. With more than 100,000 visitors from across the world, this successful airshow was the perfect platform to showcase both our latest aircraft, the A350-1000 and our premium G650ER.”

Visitors, including VIPs and media, were welcomed on board both aircraft to experience the bespoke interiors and the award-winning service provided by the five-star airline.

Qsuite features the industry’s first Business Class fully lie-flat double bed, a revolutionary quad design offering passengers a private and fully adaptable space – the first and only of its kind – in addition to movable TV monitors and privacy dividers, which transform the space into an area perfect for socialising.

The airline recently took delivery of its fourth state-of-the-art Gulfstream G650ER executive aircraft, the fastest ultra-long-range business jet in the world, making Qatar Airways the world’s largest owner-operator of Gulfstream G650ERs. Qatar Executive has a total of 30 Gulfstream aircraft on order, a combination of the G500, G600 and G650ERs.

Starting 1 July, Qatar Airways will begin operating a Boeing B787 between Doha and Sabiha Gökçen International Airport in Istanbul, to accommodate for the summer traffic increases, to and from this renowned destination.

Qatar Airways enjoyed a record-breaking year in 2017, claiming more than 50 individual awards across multiple categories, demonstrating its continued commitment to exceeding passenger expectations with its innovative approach to product development and dedication to customer experience.

Leading the host of awards received by the airline last year is the prestigious accolade of 2017 ‘Airline of the Year,’ awarded by the 2017 Skytrax World Airline Awards, which was held at the Paris Air Show. This is the fourth time that Qatar Airways has been given this global recognition. In addition to being voted Best Airline by travellers from around the world, Qatar’s national carrier also won a raft of other major awards at the ceremony, including ‘Best Airline in the Middle East,’ ‘World’s Best Business Class’ and ‘World’s Best First Class Airline Lounge’.

Earlier this month, Qatar Airways revealed a host of forthcoming global destinations in line with its expedited expansion plans, including the announcement that it will be the first Gulf carrier to begin direct service to Luxembourg. Other exciting new destinations to be launched by the airline include London Gatwick and Cardiff, United Kingdom; Lisbon, Portugal; Tallinn, Estonia; Valletta, Malta; Cebu and Davao, Philippines; Langkawi, Malaysia; Da Nang, Vietnam; Bodrum and Antalya, Turkey; Mykonos, Greece and Málaga, Spain.
Share on FacebookShare on TwitterShare on Google+
Tags: Qatar Airways
Αναρτήθηκε από geop στις 9:25 π.μ.