The Drinkable Book in South Africa could save lives 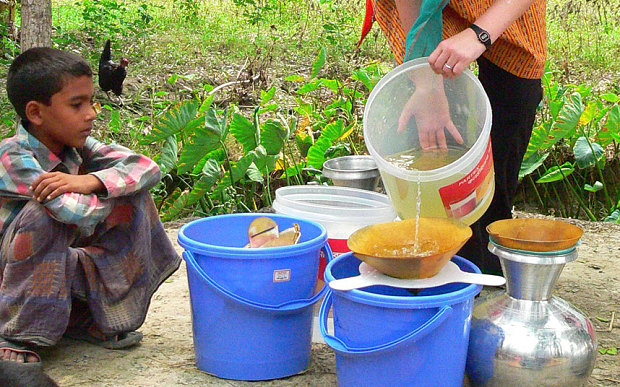 Imagine if cleaning impure water was as simple as tearing a page out of a book and using it as a filter in a holder. Well, imagine no more: it’s become reality. After field trials, a book with pages that can be ripped out and used to filter drinking water, has proven successful. The Drinkable Book is a combination of usage instructions, treated paper, and helpful information on the importance of purifying water.
“Its pages contain nanoparticles of silver or copper, which kill bacteria in the water as it passes through,” noted British news site, BBC.”In trials at 25 contaminated water sources in South Africa, Ghana and Bangladesh, the paper successfully removed more than 99% of bacteria.”These results were shown at the 250th national meeting of the American Chemical Society in Boston, US.

How it works
The pages of the Drinkable Book contain silver nanoparticles that are lethal to bacteria, which are killed as water passes through.”Silver has been used for disease prevention for many centuries,” explains the official Drinkable Book website. “Some of the pathogens transmitted through untreated water can lead to severe and life-threatening disease, such as typhoid, cholera, hepatitis, E. coli. Typically, the symptoms of waterborne disease are gastro-intestinal illness, diarrhea, and dehydration.”
Developed by researcher Dr Theresa Dankovich at Carnegie Mellon University in Pittsburgh, it was tested for several years while Dankovich worked at McGill University in Canada and then at the University of Virginia.
“All you need to do is tear out a paper, put it in a simple filter holder and pour water into it from rivers, streams, wells etc and out comes clean water – and dead bacteria as well,” she told BBC news. “Ions come off the surface of the nanoparticles, and those are absorbed by the microbes.”
The website says the book’s main benefits are that it is simple, cost-effective and portable. “The water treatment also leaves no off-taste to the clean water, unlike chlorine or iodine treatments.”
Dankovich explained that the book was aimed at people living in developing communities. She told BBC news that 663 million people across the world did not have access to clean drinking water.

Trials and successes
The development team headed by Dankovich first tested the pages of the book in a lab, by artificially contaminating water. Successful results led to field trials in developing countries which lasted over two years. In these tests, Dankovich worked with charities such as Water is Life.


“Greater than 90% of the samples had basically no viable bacteria in them, after we filtered the water through the paper,” she told the BBC. “It’s really exciting to see that not only can this paper work in lab models, but it also has shown success with real water sources that people are using.”
The paper was used in the most extreme circumstances. It was tested at a site where raw sewage was being dumped into the stream, and it decreased the levels of bacteria in the water.
“But we were really impressed with the performance of the paper; it was able to kill the bacteria almost completely in those samples. And they were pretty gross to start with, so we thought – if it can do this, it can probably do a lot.”

Practical use and recognition
According to The Drinkable Book’s website, it is estimated that one filter can be used to clean approximately 100 litres of water, which means a single book could filter a single person’s water supply for up to four years.
The book has been recognised by the 2015 Innovation By Design Awards. Out of 1 500 projects for nominations from around the globe across all the categories, The Drinkable Book won the overall prize in the health category.
The Voss Foundation, an organisation that works for access to clean water, notes there are many benefits to communities as a whole if clean water is available.
Αναρτήθηκε από geop στις 7:18 π.μ.