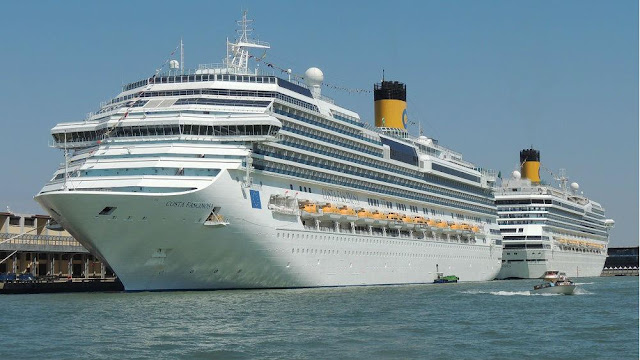 Costa Cruises today announced an order for two next-generation cruise ships with the largest guest capacity in the world. They will feature a revolutionary “green design” as the first ships in the cruise industry (together with two new ships previously announced for AIDA Cruises, Costa Group’s German brand) to be powered by liquefied natural gas (LNG), the world’s cleanest-burning fossil fuel.

The two ships will be built at the Meyer shipyard in Turku, Finland, with delivery in 2019 and 2020. Each vessel will exceed 180,000 gross tons, offering more than 2,600 passenger cabins and a total capacity of 6,600 passengers.

Costa’s order is part of a multibillion-dollar contract with two Meyer shipyards in Turku and Papenburg, Germany, including the two new ships for AIDA Cruises. The contract with Meyer is part of a previously announced memorandum of understanding between Carnival Corporation & plc, the parent company of Costa Group, and leading shipbuilders Meyer Werft, Meyer Turku and Fincantieri S.p.A. for nine new ships to be delivered between 2019 and 2022.

“These ships will expand the leadership position for the Costa Group, the market leader in all the major continental European markets,” said Michael Thamm, chief executive officer of Costa Group. “The multibillion-dollar contract with Meyer mirrors our strategy to constantly innovate our vacation offers and to deliver an unmatched cruise experience to our guests.”

“The two Costa ships are a real innovation for the market, setting new standards for the whole industry: they will be the first green ships powered with LNG and they will offer an extensive number of guest-friendly features,” said Neil Palomba, president of Costa Cruises. “Furthermore they will be the expression of the new positioning Italy’s finest. The order also confirms the Costa brand will continue to grow, becoming even stronger and continue generating a positive economic impact in the main countries where it operates, including Italy.”
Pioneering a new era in the use of sustainable fuels, Costa’s new ships will be the first in the cruise industry to use LNG in dual-powered hybrid engines to power the ship both in port and at sea. LNG will be stored onboard the ships and used to generate 100 percent power at sea — another industry first for Costa. Using LNG to power the ships in port and at sea will significantly reduce exhaust emissions to help protect the environment and support the company’s aggressive sustainability goals.

“We are honoured that Costa Group has entrusted us with the technical design and construction of their next generation ships for Europe, featuring a revolutionary ‘green cruising’ design implemented to meet specific Costa Group’s needs,” said Jan Meyer, chief executive officer of Meyer Turku Oy. “We are building the ships with a strong team in Turku and with the support of mostly European suppliers, who are the best in their field. Among those leading suppliers, there are also a number of Italian companies, which we have worked well with in Finland as well as in Germany. We are aiming to continue this successful legacy.”

The new order also represents a remarkable opportunity for Italy. According to Costa Cruises’ forecast, about 750 Italian crewmembers are expected to be hired to work on the two ships. Furthermore, Italy will be featured in the onboard guest experience: the new ships will be ambassadors of Italy’s finest at sea, allowing thousands of international guests to discover the excellence of the country in terms of style, hospitality, gastronomic specialities and entertainment.

The new ship order will allow the Costa Group to continue to build on its leadership position in the continental European cruise market — a market in which five out of 10 cruise guests in 2014 sailed onboard a Costa Group ship.
Αναρτήθηκε από geop στις 10:13 π.μ.